An interview with Aaron Tucker 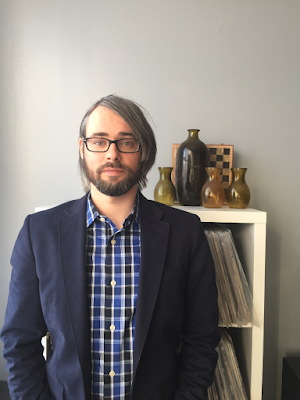 Aaron Tucker is the author of the novel Y: Oppenheimer, Horseman of Los Alamos (Coach House Books) as well as two books of poetry, Irresponsible Mediums: The Chess Games of Marcel Duchamp (Bookthug Press) and punchlines (Mansfield Press), and two scholarly cinema studies monographs, Virtual Weaponry: The Militarized Internet in Hollywood War Films and Interfacing with the Internet in Popular Cinema (both published by Palgrave Macmillan). His current collaborative project, Loss Sets, translates poems into sculptures which are then 3D printed (http://aarontucker.ca/3-d-poems/); he is also the co-creator of The ChessBard, an app that transforms chess games into poems (http://chesspoetry.com). Currently, he lives on the Dish with One Spoon Territory, where he is a lecturer in the English department at Ryerson University (Toronto), teaching creative and academic writing. He will be beginning his doctorate as an Elia Scholar in the Cinema and Media Studies Department at York University. You can reach him atucker[at]ryerson[dot]ca

How easy was it to put together your latest collection?

My latest, Irresponsible Mediums (https://bookthug.ca/shop/books/irresponsible-mediums-the-chess-games-of-marcel-duchamp-by-aaron-tucker/), translates the chess games of Marcel Duchamp into poems. It was built from the work that Jody Miller and I did creating The ChessBard (chesspoetry.com), an app that translates old chess games into poems, that also includes a playable version. In terms of “writing” the book, since I translate, rather than wrote, the poems of the text, it involved a lot of other types of writing: there was the code we (mostly Jody) wrote; the 12 source poems I wrote; the language templates I wrote; the poetic statement (http://chesspoetry.com/poetics/); the grant applications; the social media posts promoting and explaining; the emails to Jay and Hazel at Book*hug; the emails to Jennifer Shahade, who wrote the excellent introduction to the collection; the emails to Derek Beaulieu to make sure I got his own visual translations of Duchamp’s poems in the book. I don’t think this web of writing is that unusual for any one book, but the putting together of the disparate parts borne of that writing, all the games in translation, the introduction, the poems was a large, exhilarating process.

By contrast, the book I’m working on now, tentatively titled Catalogue d’oiseaux after Olivier Messiaen’s solo piano piece of the same name, involved actually writing the poetry part and not just handing it off to my computer co-author. But in much the same ways, I did find myself putting the different parts together: ostensively, it’s a long lyrical poem, stitched together by travel, art, sex, birds, growing older and into love outside your twenties, with all the events of two lives combining. While I’ve just finished the first draft, and it’s messy, beyond messy, I was happy to polish a small part of it from rob mclennan at above/ground for a chapbook (http://abovegroundpress.blogspot.com/2018/04/new-from-aboveground-press-catalogue.html).

Your first novel appeared recently. Are you able to work on poetry at all during the composition of a novel?

I was! Typically, I’m the type of person that likes to have parallel problems that I am working through, and most often when I shift into the editing and revision stage of a manuscript, I find myself starting something new to balance that a bit. So, as I moved into editing of Y (https://chbooks.com/Books/Y/Y2), a novel about Robert Oppenheimer’s leadership at Los Alamos of the Manhattan Project, I began to write Catalogue d’oiseaux. For me though, I need to work steadily, daily if I can, on things, and having two writing acts in parallel helps me to stay sane, but also helps remind me that they are interconnected, and that the two feed each other, mutate the other in strange and lovely ways. With Y, I think working on the poetry forced the novel, at the scale of the book, out of a more traditional, straightforward bit of historical fiction and into something more a-chronological and weirder; at the scale of the sentence, of the word, the poetry work demanded a smaller focus, pushed the sentences past a lot of their more natural breaking points, that tended to morph the facts of Oppenheimer’s life into an amalgam of metaphor and those facts. Likewise, editing the prose, extended the lines of my poems – they are by far the longest, shaggiest lines I’ve written – but also encouraged me to write one long poem, a continuing narrative, a poem closer to the scale of a novel.

How is the process of writing a novel different than writing a collection of poetry?

I’m not sure if my next novel will be similar, but Y, being historical fiction, required a fair bit of research, ranging from biographies of Oppenheimer, histories of the atomic bomb, writing on New Mexico, the poetry that he read and loved, biographies of the women in his life etc. As such, I felt like I was charging up for a much longer time, building all sorts of different images and scenes and narratives, and mentally seeing how they might fit, then actually planning out at least the first few chapters with broad signposts. It was work start-and-stop than I was used to, and often the writing and editing of it would be interrupted by my wanting to ensure the facts and timelines were correct.

The poetry, while also involving a lot of outside reading and thinking, in contrast, was something that poured out a little faster, with a little less self-consciousness. I hesitate to say it was easier, but it was definitely smoother, and I think it helped that it was all one piece, with a series of movements, rather than a collection of parts I would have to put together, like my previous punchlines (http://mansfieldpress.net/2015/03/punchlines-2/)

You seem to approach poetry collections as projects. How did this process emerge?

That’s funny, yes, I hadn’t thought about it like that. I think part of this stems from my tendency to start with big questions and then work to answer them with some poetic gesture. For Irresponsible Mediums, it was “How can I merge chess and poetry in some way?” For Loss Sets (http://aarontucker.ca/3-d-poems/), an ongoing collaborative project with Jordan Scott, Namir Ahmed and Tiffany Cheung, Jordan actually asked “Could we translate poems into 3D printed sculptures?” These lead to smaller questions, and it’s usually in answering those smaller questions or problems that the actual work gets produced. But I think working backwards from a large, semi-impossible looking question, works best for me.

I think for Catalogue d’oiseaux, the beginning question was “What would a love poem, at this stage of my life, look like?” Looking back, I can see myself asking this because I did want to write something that looked a little more what I used to write, something lyrical, less conceptual and more emotional; I wanted to make a pretty thing, rather than sort out some sort of intellectual concept.

I have been lucky to have so many mentors and great writers as peers, am still lucky to be able to have nourishing conversations, often not about writing at all. In particular, I think of John Lent, who lead my first creative writing workshop when I was in first year at college; he taught me so much about sensitivity and kindness in reading and writing, and then layering analysis and feedback on top of that. I was also lucky to have Margaret Christakos as the writer-in-residence at the University of Windsor when I was there doing my MA, and am lucky still get talk with her; she encouraged me to look at language as operating on different levels (as syllabus, as words, as lines, as stanzas, as poems, as books), and that poetry can/should work on all simultaneously.

I have only recently completed a French proficiency certificate at Ryerson, and I think my instructors over the last few years have really taught me a lot about how language works. Once I got over being the worst student in the room (and often having my former students in the class, far exceeding my baby French), I found it eye opening. Sounding like a child when speaking French, the frustration of that, pushed my writing in English to actually be leaner, something I could have done without understanding, in a semi-mechanical way, how a sentence works.

I recently finished the first draft of Catalogue d’oiseaux and am excited to move forward with it with an editor – it needs it! I am also gathering things for a second novel, set in Toronto and playing off the John Wayne movie The Searchers. The most immediate thing I have been working on is a screenplay adaptation of Y. I’ve never written a screenplay before and who knows if it will ever amount to anything, but I gave myself the challenge and I am finding it really wild and energizing.

There is a lot of energy in Toronto right now, and it’s great to in the middle of it!

I am excited to see a full work from K.B Thors in 2019. In the meantime, her translations are excellent! Stormwarning: http://www.phonememedia.org/stormwarning/!

Jeff Kirby is the saint of Knife Fork Book, and does everything there, including publishing really lovely books. But! He’s also a great poet! (https://knifeforkbook.com)

Michelle Brown’s Safe Words is quite a good book, and I think the folks at Palimpsest make great books (http://palimpsestpress.ca/books/safe-words/)!

I also recently met Kyle Flemmer, who writes and makes in Calgary, as founder of The Blasted Tree, including his work with star arrangements (http://www.theblastedtree.com/-19-54-12-53)!