An interview with Catherine Graham 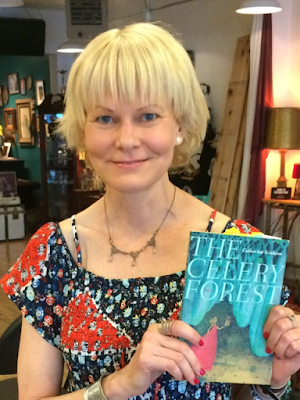 Catherine Graham is a Toronto-based poet and novelist. Among her six poetry collections The Celery Forest was named a CBC Best Book of the Year, appears on CBC Books Ultimate Canadian Poetry List and was a finalist for the Fred Cogswell Award for Excellence in Poetry. Michael Longley praised it as “a work of great fortitude and invention, full of jewel-like moments and dark gnomic utterance.” Her Red Hair Rises with the Wings of Insects was a finalist for the Raymond Souster Award and CAA Award for Poetry and her debut novel Quarry won an Independent Publisher Book Awards Gold Medal for Fiction, “The Very Best!” Book Awards for Best Fiction and was a finalist for the Fred Kerner Book Award. She received an Excellence in Teaching Award at the University of Toronto SCS and was also winner of the TIFA’s Poetry NOW competition. Her work is anthologized internationally and she has appeared on CBC Radio One’s The Next Chapter with Shelagh Rogers. Visit her at www.catherinegraham.com. Follow her on Twitter and Instagram @catgrahampoet

The loss of my parents turned me to the writing life. My mother died on Christmas Day during my first year at university and my father, the September of my last year. Introverted, shy and overwhelmed with sadness, I was consumed with grief. A worried family friend suggested I see a therapist. The therapist suggested I keep a journal to “write out my feelings.” Journaling provided some sense of relief, an outlet for the confusion, anguish and guilt that accompanies loss, but it wasn’t a cure.

One day I started playing with words—memories of my parents, images of the limestone water-filled quarry we grew up beside. This engagement with language, so different from journaling, was energizing and exciting, it led to discovery and surprise. Although I was writing about sad things I was absorbed so deeply time disappeared. When I worked up the courage to show that same family friend, she told me I was writing poetry. I knew what poems were of course, but to my mind poetry was written by old men with white beards, not young women steeped in grief. From that point on I wanted to know as much as possible about the art and craft of poetry. This took me to Northern Ireland where I completed an MA in creative writing in poetry. What keeps me going as a writer is the act of poiesis—making—when the outside world disappears and I’m immersed in language and the imagination.

Influence is something I can’t say I’m completely conscious of as a writer. I began my poetry journey in Northern Ireland so poets from both the North and South have impacted me: Michael Longley, Seamus Heaney, Joan Newmann, Paula Meehan, Louis MacNeice to name just some, plus UK and American poets. Only when I returned to live in Canada did I start connecting with the work of Canadian poets on a deeper level.

Have you noticed a difference in the ways in which you approach the individual poem, now that you’ve published a handful of books?

The blank page is still the blank page. Facing the unknown through the twitch of a line or image encased in music never goes away. Having published six collections of poetry, I’m (somewhat!) better at trusting the process, the leap of faith creativity demands.

How important is mentorship been to your work? Is there anyone who specifically assisted your development as a writer?

Looking back I never had that English teacher to connect me with what seems so obvious now, the love of poetry. As mentioned earlier, loss led me to what language can do in such a condensed rhythmic form.

My journey as a published poet began in Northern Ireland. My first chapbook The Watch received positive reviews in Poetry Ireland Review, Books Ireland and led to my inclusion in The White Page / An Bhileog Bhan: Twentieth Century Irish Women Poets and The Field Day Anthology of Irish Writing, Vol IV & V, truly an honour. When I returned to Canada I knew no poets or writers. Eventually I made my way into Toronto (from Burlington where I was living at the time) to a reading series created by Paul Vermeersch: The IV Lounge Reading Series. On instinct I asked Paul if he might have a look at the manuscript I was working on, my first full collection. He kindly said yes. A week or so later we met at Kilgour’s on Bloor Street. Page by page we went through the poems chatting collaboratively about what worked, what didn’t, what needed work, etc. When finished, Paul looked at me and said, “You know, I’d like to publish this.” Until that moment I had no idea he was the poetry editor of Insomniac Press. Five collections later, our relationship continues. Paul is now Senior Editor at Wolsak and Wynn with the imprint Buckrider Books. I am eternally grateful for Paul’s continued belief in my poetry.

You published your first novel in 2017. What is the difference between working on poems to working on fiction? Are you able to work on both poetry and fiction concurrently?

Quarry was published the spring of 2017 with Two Wolves Press. There were things I couldn’t do in poetry that I realized could only be done in fiction. That’s what led me to the form. The first draft of Quarry actually began with poems. I wrote prose passages between them, linking the narrative, to find my way into the story. Looking back the poems were like training wheels. I needed them to start. Then, once my skillset was strong enough with what fiction requires—character, dialogue, plot, setting, and so on—I took them away.

I’m able to work on both forms with prolonged chunks of time. For example, if I work on poetry in the morning, I can work on prose in the afternoon or vice versa.

All poets should receive more attention, the dead and the living. There is so much to gain from reading poetry—engagement with language, mystery, ambiguity, emotion, thought, musicality, imagery, humour, madness, beauty—the rewards are endless. There are so many poems out there waiting for readers to find them. It’s the intimacy of the form I love most, the one-on-one experience—soul-to-soul, dare I say, in this mass-marketed, consumer-driven world.

Poems have the ability to rip your heart out with their word-force and aural energy then put it back in before you know what happened. They can take you out of yourself, give you a fantastic buzz, and leave you without any hangover. And they’re free (libraries and online), though poets love it when you buy their books (bookstores too!). The League of Canadian Poets has started a poem-a-day program called Poetry Pause. Readers may find more info here: http://poets.ca/poetrypause/