an act of growth 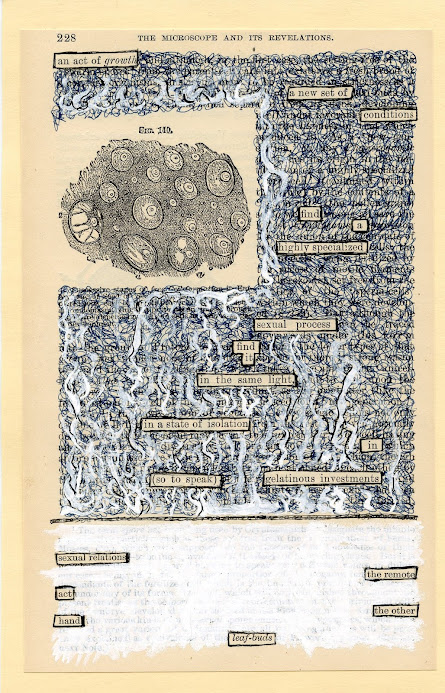 Jay Besemer is the author of the poetry collections Theories of Performance (The Lettered Streets Press, 2020), The Ways of the Monster (KIN(D) Texts and Projects/The Operating System, 2018), Crybaby City (Spuyten Duyvil, 2017), Chelate (Brooklyn Arts Press, 2016) and Telephone (Brooklyn Arts Press, 2013). He was a finalist for the 2017 Publishing Triangle Award for Trans and Gender-Variant Literature and was included in the groundbreaking anthology Troubling the Line: Trans and Genderqueer Poetry and Poetics. Find him online at www.jaybesemer.net and on Twitter @divinetailor.

In the morning
I turn it in my hand,
a stunned thing

What was that
—green, invisible—
what was lost

am I
night waiting
in its undercoat

revisiting
my own helplessness,
slow shiver

Derek Webster’s Mockingbird (Signal) was a finalist for the 2016 Gerald Lampert Award for best poetry debut. He received an MFA from Washington University in St. Louis and was the founding editor of Maisonneuve. His poetry and prose have appeared in many publications including The Malahat Review, The New Quarterly, Boston Review, The Walrus, and elsewhere. He lives in Montreal.

at the normal time.

what is revealed when they leave.

flower in the Costco parking lot.

The air has passed through them

it must now be improved.

As a kiss is improved

has included you among the bereft.

For every loss there are 9 additional losses.

Until everyone is lost.

And everyone is found.

The curtains are always drawn

over my neighbors’ house

and I can’t tell if they’re sleeping

so I suspect the worst.

But then I find out

they left a while ago

and there’s nothing behind the curtains

Already, I’m nostalgic for the lockdown

even tho it’s still here.

the smell of hand sanitizer

and sex in mid-afternoon

and bored with zoom.

Don’t worry, the camera was off.

Except for that one time

and you missed it.

In the particles of the present

In the small grit of the now place.

I want to see the world differently

Monty Reid is poet living in Ottawa.  Among his most recent books are The Luskville Reductions (Brick) and Garden (Chaudiere), and chapbooks from above/ground, postghost, corrupt press, and other small publishers.  He was the Managing Editor of Arc poetry Magazine for many years and is currently the Director of VerseFest, Ottawa's international poetry festival.

Natalie Simpson is the author of accrete or crumble (LINEbooks 2006) and Thrum (Talonbooks 2014). Her poetry has appeared in several anthologies, including The Best Canadian Poetry in English, and many chapbooks, most recently Anonymous (Widow) Anonymous (Wife) (The Blasted Tree 2020). She practices pro bono law in Calgary.

the end of the noctuid series 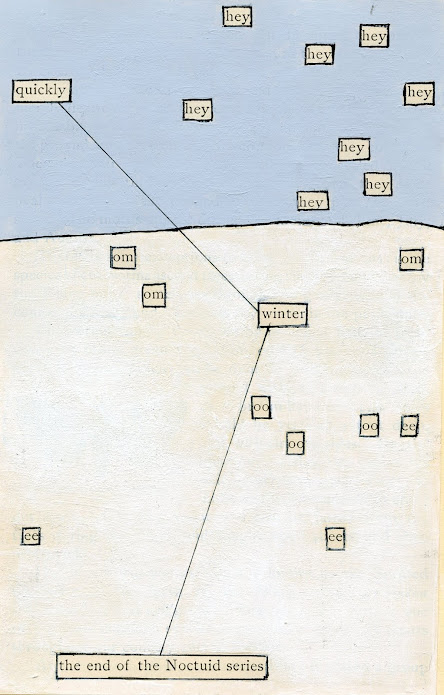 Jay Besemer is the author of the poetry collections Theories of Performance (The Lettered Streets Press, 2020), The Ways of the Monster (KIN(D) Texts and Projects/The Operating System, 2018), Crybaby City (Spuyten Duyvil, 2017), Chelate (Brooklyn Arts Press, 2016) and Telephone (Brooklyn Arts Press, 2013). He was a finalist for the 2017 Publishing Triangle Award for Trans and Gender-Variant Literature and was included in the groundbreaking anthology Troubling the Line: Trans and Genderqueer Poetry and Poetics. Find him online at www.jaybesemer.net and on Twitter @divinetailor.

Things I Want in My Coffin

Not that time will matter, but my watch from Dad.

Line it with a quilt made by Mom and Grandma;

A pen and paper. Book of Canadian poetry.

The postcards of our travels, those nights we danced

to blues music, the image of our secluded lake.

Throw in a map in case I get lost along the way.

It’d be nice to know I look alluring, so please

keep my hair long and dress me in a skirt.

The words that had yet to touch these lips

or be engraved across a page - bury them.

Tuck in that tiny little bit of my heart, put on reserve

if he had ever wanted me back - he’s lost his chance.

But please leave out my wit and ability to laugh,

pair it with my love and optimism; embody them

in those solitary nights when even mice prefer

Ashley Prince is a writer and social worker from the Ottawa Valley, Ontario. She holds a BA from the University of Prince Edward Island and a MSW from Carleton University. She has been published in bywords.ca, the UPEI Arts Review and has a poem forthcoming in The Maynard. 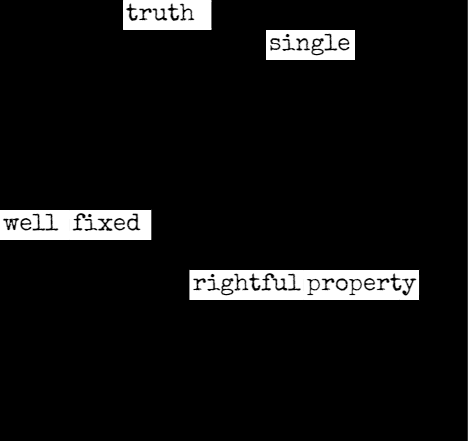 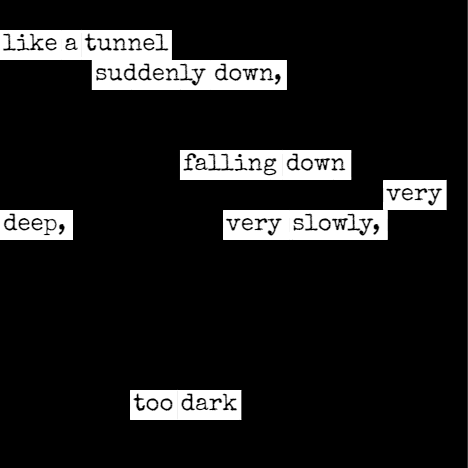 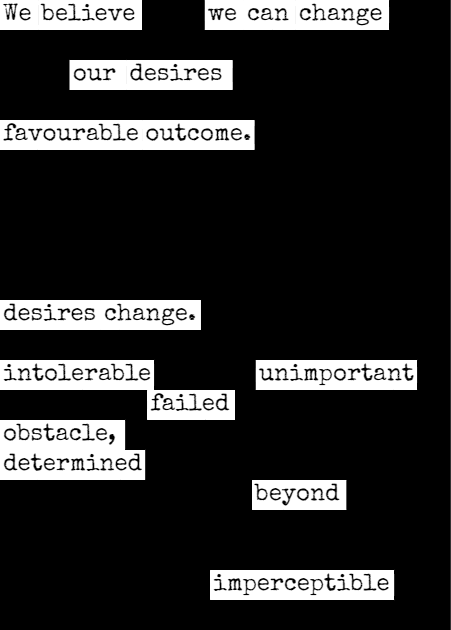 Shiksha S Dheda is a South African of Indian descent. She uses poetry (mostly) to express her internal and external struggles and journeys, inclusive of her OCD and depression roller-coaster ventures. Mostly, however, she writes in the hopes that someday, someone will see her as she is; an incomplete poem.

the snow geese in conway might not be geese at all

the snow geese are munching on
thanksgiving lefse in stanwood
hunting for glass globes entertaining
people driving home w/a
curtain of ah! as they rise

Constance Bacchus lives with her daughter in the Pacific Northwest near Grand Coulee Dam. She has writing in or forthcoming in City Brink, Revolute, Salmon Creek Journal, Dreich, Cirque, Shrub-Steppe Poetry Journal and Cathexis Northwest. Her first poetry collection is named Lethe (Cyberwit, 2020) and a second one is due out soon. She has some writing at Them Dam Writes Online.

a new and natural image / dirt stamped on ho-chunk land / a people
who kept returning and I wondered  / to where / we walked down
sauk street / to mr. wilson’s card shop / the front porch LLC / sauk
land / we opened topps packs / like asmr before asmr / we made trade

Lisa Marie Brimmer is a poet, essayist and theatre artist born on Ho-Chunk land now living on Dakota and Anishinaabe-Ojibwe land in so-called Minneapolis, MN. They are published in The Public Art Review, Gasher, Open Rivers, and The Alliance of Adoption Studies and Culture Journals, Konch Magazine and multiple anthologies. @leesuhmaroon & LisaMarieBrimmer.com

: any of various systems of healing or treating disease (such as chiropractic, homeopathy, or faith healing) not included in the traditional medical curricula of the U.S. and Britain

hidden whispers of ingredients found only in sicily. smuggled in the hollow bottoms of suitcases. we had to wait for nonna to visit, unpack, and ration them out. roots, leaves, or lemons wrapped carefully in napkins. powders for cuts, top-quality bandages, creams for all ailments. little treasures stuffed in the back of the bathroom medicine cabinet. fizzy brioschi for stomach aches was my favourite. I would steal the deep blue plastic bottle and shake some out like nuts. the twisty white granules piling in the palm of my hand, worm-like. the fizz filling my swollen cheeks. one day, my toddler brother was caught in the grip of a screaming fit in a dark greek restaurant on the danforth. the waitress, shocked, whispered, malocchio, the evil eye. my mother’s face went white. she knew what she had to do. long distance telephone calls, drops of olive oil in bowls of water. a series of prayers and the wringing of hands. until he stopped.

Domenico Capilongo is a Toronto high-school creative writing teacher and Karate instructor. His first two books of poetry, I thought elvis was italian, hold the note and short fiction collection, Subtitles, were shortlisted for several awards. His latest books of poetry, send, is about the way we communicate. His work has been featured in several anthologies as well as national and international literary journals. He has recently finished a manuscript about words that were born in the 1970s. He also writes an interview series called Un Momento for italocanadese.com. Find out more about him at: domcapilongo.wixsite.com/home

Email ThisBlogThis!Share to TwitterShare to FacebookShare to Pinterest
Labels: poems

I am he, laughing, chin up, and shaking
my head, spokes and wheels and a fire

at the spine. My will is in the pillars
and in the high wall. I saw the pinnacle,

an image in stone, but water invaded the graves
of the great. The foundationless pebbles stirred

with the slow stirring of grubs, and the earth
urged them this way and that, like porridge

coming to the boil in a pot, and the grubs
were made to crawl by it, as dust crawls

on the head of a tapped drum, as Satan
rose out of the west, clad in nothing but hair.

I tied my chosen ones to the sky
with bands of iron, cabled and riveted,

but their glory bent my spine. The tower swayed
like a tall tree above the blue cup of earth.

– from William Golding’s The Spire

Artist Statement: These poems from a series of poems entitled, "I Am What They Make Of Me". Each is written from the perspective of a character in a novel who has influenced me as a writer and as a person. The poems draw much of their language directly from the source texts, arranging and adapting them to emphasize the elements that speak most to my connection with the characters.

Jeremy Luke Hill is the publisher at Gordon Hill Press, a literary publisher based in Guelph, Ontario. He is also the Managing Director of Vocamus Writers Community, a non-profit community organization that supports book culture in Guelph. He has written a collection of poetry, short prose, and photography called Island Pieces; four chapbooks of poetry called Poetry of Thought, CanCon, Trumped, and These My Streets; two poetry broadsheets called Grounded and Indexical; and a series of poetry broadsheets called Conversations with Viral Media. He also writes a semi-regular column on chapbooks for The Town Crier. His writing has appeared in in ARC Poetry, The Bull Calf, CNQ, CV2, EVENT Magazine, Filling Station, Free Fall, The Goose, HA&L, The Maynard, paperplates, The Puritan, Queen Mob’s Tea House, The Rusty Toque, The Town Crier, and The Windsor Review.