An interview with John Luna 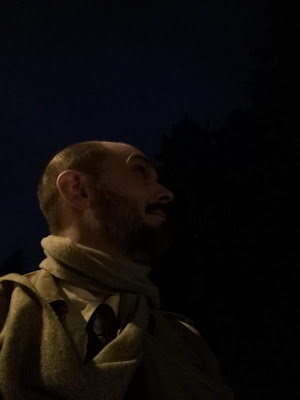 John Luna: I am a dual Canadian-American citizen born of Mexican + American expatriates. Besides writing, my practice is as a visual artist whose background includes painting, sculpture and installation, and a teacher working in the areas of art, design and art history. I currently reside on an island off of the west coast of N. America. Previous publication of written work in art criticism and poetry has appeared in Ditch, Canadian Art, Border Crossings, Canyon, Cordite, and Matrix, among others. A first collection of poems, Listing (Decoupage Publishing, 2015) was released through a small independent press with the help of a crowdfunding campaign. A second book-length manuscript was recently (2017) shortlisted for the Robert Kroetsch Award for Innovative Poetry.

Sometime in grade school… There was a huge making culture in our house… My mother was an etcher who also worked with puppets, wrote children’s stories, and made us toys. My father had been a painter and curator and also wrote poetry, fiction and entertained a host of unpublished research projects, and my sister drew pictures and wrote stories… This was a huge component of mutually sustained esteem for an underdog family. The will to prolong and preserve that culture is something that I have trouble framing and frankly don’t want to; it (that culture) is formless, or it formlessly asserts itself in the desire to continue to write.

Your author biography mentions your work in painting, sculpture and installation. Are you able to work on poetry at all during the creation of visual artwork? How are you able to keep the two separate?

You put your finger on something very difficult. I used to move back and forth between them, swearing one off… because the problem is the notion of an outlet, and that the enterprise has to seem like the only possible choice (outlet or escape or way of going forward) otherwise it succumbs to all kinds of limiting conventions. But fertile times for one are also (generally) good for the other, and I learned a lot about how to approach editing after years of problems by adopting tools or attitudes used in painting and collage or assemblage. One problem is my excusing a lack of studio time because writing has been happening, or vice versa, and knowing that this is just a sop for the drive.

I don’t know that I want these things to be separate (I can recall my Dad giving me Blake’s Dante to underscore the idea of doing/being both), but I know that they have, often, very different audiences. And I don’t want the product of both situations to point back to some notional person (the hybrid artist/author person) at all; something about the self-consciousness of this approach is repellant. I am in the midst of organizing a show right now of visual things that also includes writing, and the importance, the priority, is in maintaining a kind of incoherence between them as a way of addressing this problem. A parallel I am trying to address it is by having a study in the attic and a studio in the basement, so that this kind of Bachelardian (Poetics of Space) construct can supplant the idea of being both people. I like the idea of the house, with its naïve space, as generator…

I studied poetry minimally in school (one creative writing class years ago), and kind of prize my amateurism, because thinking of the work as professionalized, conventionalized or academicized is something that was a tremendous grind for me in pursuing an MFA in painting and teaching art and art theory in colleges and in high school; It furnished me with a kind of place-identity and set of passcodes, but it also got to be an awful purgatory that I can only seem to work my way out of by working in less-formal teaching situations.

My mother’s library introduced me to Anne Sexton as a teenager, and the idea of this kind of confessional yet hysterically detached, dry irony was something I loved at that time (15? Later, I would pick up the threads of this through Eliot, Plath and Auden, in that order)…When I was seventeen there was a sort of punk rock t-shirt shop that sold t-shirts with Picasso’s sketch of Rimbaud on them. I asked my father who he was, and he reached into the shelf and handed me Louise Varèse’s translation of Une Saison En Enfer, and, as they say, nothing was the same. I guess there was kind of a teenage dandy cult I shared with in my neighborhood that included Rimbaud and Baudelaire and Eliot and around that time Artaud entered the picture… and a few years after (early 20’s) the hugely important (to me) in media res questioning of Rilke and related negative theology of Paul Celan.

Candidly: it took years to shake off the influence of reading poetry in translation, which was kind of problematic from the point of view of both developing a sense of rhythm and a tendency to valorize/exoticize European surrogate father figures… My father had grown up with a lot of racism trying to become an academic as a Mexican in Los Angeles, and spoke about five or six languages, sort of reinventing himself in European cultural terms and this rubbed off on me I suppose. He had the best poetry library I had ever seen, with lots of bilingual presentations of Hispanic authours, so I also read Lorca, Neruda and Vallejo; the latter was a favourite because I was attracted to his obscurity and use of neologism (Trilce).

Later interests were more of those same threads: Ted Hughes, Seamus Heaney, Adrienne Rich, William Carlos Williams, Allen Ginsberg, Hart Crane, W.H. Auden and John Ashbery…I sort of credit this continuum of gay uncle-figures (a self-conscious one, I think, linking Crane to Auden to Ashbery and, relatedly, John Cage and the art of Jasper Johns, Robert Rauschenberg and Cy Twombly), a crew of ironized aesthetes, with providing safe passage out of the European problem while still preserving the stoic dandy problem, which is a thing I seem to need to read and use. Recently I have been reading older essays by Joan Didion in the same way.

My family was hugely supportive of the whole creative enterprise when I was young (my current family is a great help now), but the relationship to writing was/is at a remove, in part because those years with my parents were years in which the adolescent trope of writing as a form of privacy was the mainstay. But there really was no mentor figure in terms of writing, which probably led to the problem of literature-poisoning at a young age that then had to be grown out of, gradually. At times I’m glad about this, as I put some stock in the notion (from Harold Bloom) of the value of misreading something, and mentors transfer personality and some notion of coherence along with whatever encouragement or craft is delivered… I’m very wary of received information and feel a kind of repulsion towards passed-on lesson where creativity is concerned unless (as in some art teaching) they can be either grounded in the craft limits of a specific tradition or problematized by fundamental mysteries in the way that, for instance, the entropic character of art materials can problematize artmaking.

There are two ongoing projects, both represented by publications in Train. One is a series of fourteen line “reading poems” that use the notion of a reading journal as a casting off point. These will be featured in some form in the exhibition I alluded to…

The second is a small book-length collection of rather dense prose poems (The Accords) whose names are all taken from or referring to commercial fragrances. Train published “(Rive Gauche Pour Homme Eau de Toilette (Discontinued)) in November, which was from this collection. This had originally formed the heart of a longer book that I entered for the Robert Kroetsch Award in 2017; after it was shortlisted but didn’t win, I broke the book up and began working on the parts… The other two pieces (a series of ekphrastic pieces based on galleries in New York, and a sort of negative confession by way of poems based on a suit of clothes) are still in limbo. I am still adding to and editing The Accords, which will be about fifty pages as a word document, but will be trying to find someone who wants to publish it soon, though I have to get over my discomfort with independent publishing houses that ask you to compare your work to other authours they represent as a way of disambiguating your practice, a request that frankly appalls me.

I think Nora Collen Fulton (someone I met here in BC, now residing in Montreal) is a chasteningly brilliant individual. I saw her reading from Life Experience Coolant some years ago and it was sort of that experience of just having the voice float as an icebound, room-clearing digestif that you always hope you’ll hear in your own work as you pick your way through the bits and pieces of work/doesn’t work and warm/cool/cold in a piece of writing. She will probably hate my mentioning this, and may already be receiving plenty of attention for all I know, but is it enough, and can it hurt?