An interview with Shannon Bramer 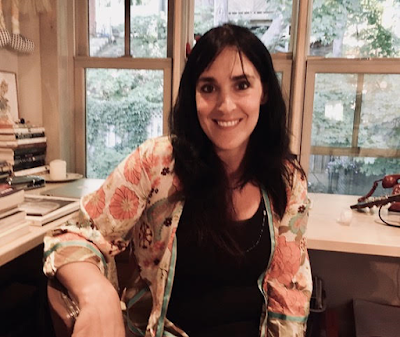 Shannon Bramer is the author of four books of poetry, most recently, Precious Energy, with Book*hug. Her plays The Hungriest Woman in the World, The Collectors and Monarita were all produced thanks to the dramaturgy and support of the Women’s Work Festival in St. John’s, Newfoundland. Shannon has a children’s book forthcoming from Groundwood in March 2019.

How did you begin writing and what keeps you going?

I started writing when I was a child; when I was in middle school I discovered the work of Canadian poets Irving Layton, Gwendolyn Mac Ewen and Leonard Cohen and fell in love with what a poem could do, how a poem could make me feel. When I got older I started reading Ana Akhmatova, Langston Hughes, Lawrence Ferlinghetti and my love for poetry and language grew and grew. I continue write because the effort to create is so satisfying—because writing consumes me and because writing is hard but it also helps me figure things out, about myself, about the world.

What was the process of putting together you latest poetry collection? Have you noticed a difference in how you approach writing poems since working on plays or your forthcoming book for children?

I’m inspired by broken things and whole things: that’s how Precious Energy came to be. It took me a long time to write and refine the manuscript because I was in over my head with life: marriage, children and caring for my parents as well.  Once the manuscript was accepted I sat on it for a long time and then kept revisiting it. I did a lot of rewriting and also let new poems emerge. My publisher, Book*hug, also paired me with a wonderful editor, Jennifer LoveGrove (a brilliant poet and fiction writer), and she helped me figure out how to push many of the poems down further into the dark, surprising places they wanted to go, especially when it was hard for me to be as brave or funny or sad as I wanted to be.

I love listening to people talk; how people express and hide what’s inside. It’s so wonderfully peculiar and specific. Some of my poems are like monologues—they arrive in my head and want to speak their piece. They possess an individuality that is simultaneously fragile and immediate.

I find playwriting to be a more fluid process. Once I have a bit of momentum and have found the special way a character speaks, dialogue unfolds quickly; the work starts to grow and change and travel. The characters in a play say things and they don’t always understand why they are saying them. Also, my plays are more extroverted than my poems. My plays possess a bit more volatility and swagger. Poems are harder to write and take longer to finish because they need so much tinkering and tenderness.

The poems I’ve written for children are really poems for human beings of all ages. But I’ve tried to see the world through the eyes of a child in these poems; these poems were inspired by conversations with children and by conversations (overheard!) between children—both my own and those I have spent time with in schools as a visiting artist and kindergarten lunchroom supervisor.

All of my work explores tension and fluidity in relationships.  I’m compelled in all genres by the beauty and power of language itself, the space it creates, on the page and inside me.

The list of poets that have influenced me over the years is enormous. The first poets I ever read and fell in love with as a child and then later as a young adult have probably been the most impactful: Gwendolyn MacEwen, Leonard Cohen, Federico Garcia Lorca, Langston Hughes, Roo Borson, Yehuda Amichai, Anne Carson, Janet Frame (a now deceased novelist from New Zealand whom I’ve been obsessed with for decades). Gypsy Guitar by David McFadden and Cruelty to Fabulous Animals by Gary Barwin were also two really important books for me—I remember being so buoyed and thrilled by the surrealism in those books, by the delight and aplomb. I still want to write poems like that someday!

I don’t think I would have found the confidence to pursue writing if not for the encouragement of my first poetry workshop instructor at York University: Libby Scheier. She was the first person, after my mother, to tell me that my poems were good. She was also an excellent, compassionate critic and it was from her that I first learned how to accept criticism and use it to help my work improve and grow. It was so wonderful to have a real-live poet (and a wonderfully bad-ass feminist poet at that) be my first poetry instructor. She did not shy away from difficult subjects in her work (sexual abuse is one example), which in turn inspired me to write about anything I wanted. I could write about flowers. I could write about terror. I could write about both at the same time.

I’m working on a strange new collection of poems and miniatures called Little Guns.  It’s going to be quite different from Precious Energy. I’m also finishing a play for young audiences called Chloe’s Tiny Heart is Closed. It’s a play for children about death and divorce (but it’s also a comedy with an endearing and grotesque clown at the centre)!

I’m sure there is more than one poet out there who should be receiving more attention! There are so many books and so many poets; but I’m quite delighted by the work of those who are currently in the spotlight in Canada. I am a poet and I am fan of poets. I only wish every poet could experience that feeling of being acknowledged and rewarded for their efforts. Writing a book is a huge amount of work and an accomplishment in itself—one that should be celebrated! However, it’s unfortunate (and understandable!) how deflated one might feel after all that work if a book isn’t properly reviewed or if seems none of your peers notice or like it. Before social media it was harder to tell who was getting attention and who wasn’t, so it’s easy to get tangled up in it all and feel worried and self-conscious about it.  I try not to. The prevalence of online magazines and blogs mean that more books are being reviewed than ever before and I’m grateful for that. I had ten years between my last two books and it feels very good to have something out in the world again.