An interview with Julia Polyck-O'Neill 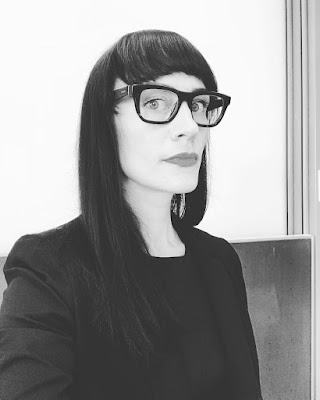 Julia Polyck-O’Neill is an artist, curator, critic, and writer. She is a doctoral candidate in Brock University’s Interdisciplinary Humanities program, where she is completing a SSHRC-funded interdisciplinary and comparative critical study of contemporary conceptualist literature and art in Vancouver. She has taught in art history and contemporary visual culture, and is currently a visiting lecturer and scholar in Transnational American Studies at Johannes Gutenberg University in Mainz, Germany. Her writing has been published in B.C. Studies, Feminist Spaces, Tripwire, Train, Where is the river, Fermenting Feminisms (a project of the Laboratory for Aesthetics and Ecology, curated by Lauren Fournier), The Avant Canada Anthology (WLU Press, forthcoming 2018), and is co-editing a special issue of the journal Canadian Literature with Gregory Betts. Her debut chapbook, femme, was published in 2016 by above/ground press; her second, Everything will be taken away, also from above/ground, appeared this month.

I began writing quite young, as a form of rebellion and self-sustenance, which writing often is for young women growing up in small places, perhaps particularly in Northern Canada, where realities can be especially isolating. (I grew up in Whitehorse, Yukon.) I found opportunities, which were thin on the ground, in a few institutional spaces to workshop my writing and to perform and publish, although my teachers tended to focus on my other creative talents, so I never learned to identify as a writer, but instead, as a visual artist and a member of the visual arts community, broadly. I rediscovered writing mainly by means of my academic voice. And so, I found myself performing and publishing from within a shifting academic subject position, and from a place of understanding myself and my voice as interdisciplinary, dynamic, and unfolding.

What keeps me going? There’s a dialogic quality to my writing, and I write in conversation with others. I find being the member of an expanding intersectional feminist community in Canada and the U.S. to be quite emotionally generative in ways that only writing and reading can satisfy. Recently, I’ve has the opportunity to work as a visiting lecturer and scholar in transnational American studies in Germany, at Johannes Gutenberg University in Mainz, and I’ve found myself driven to write by solitude and alienation, and a longing to reunite with my communities in Canada, which oscillate between Vancouver and the Toronto area.

What was the process of putting together your first chapbook? Have you noticed a difference in how you approach writing poems now that you’ve published a chapbook?

My first chapbook was produced as part of a special series rob mclennan produced to commemorate “The Concept of Vancouver,” a Canadian studies conference I co-organized with Gregory Betts and Andrew McEwan that featured scholars, artists, activists, and poets. I had assembled a series of poems as a result of responding to a selection of critical posthumanist and other feminist texts, and receiving the invitation to put something together, I thought it might be interesting to see how it felt to see them published and out in the world. I’ve been surprised at the amount of support I’ve received in relation to releasing this little book, and it’s helped me establish a stronger and more sustained writing routine. I credit the sense of writing for and with a community in helping me develop as a writer. That shift from writing only for myself and my own thinking process, to writing with a sense of purpose has helped me to find a voice that in turn helps my academic writing; I feel more assertive, and I feel I have something to share with my audience. I feel the care and attention of the experimental poetry community.

Because my research project is so engaged with the poetics of specific poets, it’s inevitable that my work in theory and criticism and my creative project intersect significantly. My poetic work also engages directly with the work of others because of my often ‘uncreative’ method. To name a few influential poets in my academic life, I’d first gesture to the more obvious: L=A=N=G=U=A=G=E poets; KSW poets, especially Lisa Robertson and Jeff Derksen. Oakland poets; Buffalo poets; Philadelphia poets. Transnational poets. There are also the less-obvious figures of the writerly conceptual artists whose manifestos, art writings, and autobiographical writings I reference in my recent work: Martha Rosler; Adrian Piper; Gillian Wearing. And then there are the philosophers whose work becomes increasingly poetic as I re-examine and turn it over it in my writing: Sara Ahmed; Rosi Braidotti; Hélène Cixous.

Consider first that the question of who and what has hindered my development as a writer would also make for a useful question, as least rhetorically. We should be turning our attention to the structural issues that discourage women and marginalized individuals from writing and publishing.

But yes, turning back to the actual question, those who make it easier and safer are of supreme importance. Mentorship has been tremendously important to the development of my work and identity. Certainly, Gregory Betts has helped me tremendously in feeling more comfortable publishing, and his continued support remains quite helpful in building international scholarly and writerly networks. Poet and published rob mclennan also figures prominently in my life as a kind of perpetual support system, not only in offering me opportunities to publish, but also in that he almost singlehandedly sustains a significant community of writers and readers. Poet Jeff Kirby is another person who helps foster and build community at their poetry-only bookshop, Knife Fork Book, in Kensington Market; the whole Toronto experimental scene seems to have undergone a facelift as a result of Kirby’s tireless efforts. I was lucky to read at the closing event for the initial space, just before I left for Germany.

My own emerging role as a mentor is also important to my work. I feel responsible to the students I’ve encouraged, as some of them are writing against all odds. I also do my best to nurture the work of other writers when I am given the opportunity. Writing can be a precarious, delicate affair for many.

In an immediate sense, I am working on a second chapbook for above/ground, Everything will be taken away, which will be published in August this year as part of the press’ 25th anniversary. I actually have two manuscripts I’m working on in tandem. I’m working on multiple projects in this way because I’ve started to think of my work in terms of seriality and thematic unity, largely because I’ve been enjoying tighter serial collections in my reading. In the longer term, I’m developing a full-length poetry manuscript that connects to my academic research, and explores poetics and visuality, particularly in terms of theories and philosophies of form, ontology, and materiality. And, of course, my dissertation.

This is a surprisingly challenging question to answer, in that there are so many talented poets I read whose work occupies a peripheral space in literary performance and publishing, and sometimes in the intersections between literary and academic publishing.

I’ll start with a poet whose work is increasingly important given recent events, and I’m under the impression that many would benefit from encountering: Heriberto Yépez, whose work challenges U.S. border politics and the concept of borders more broadly. I saw him give a paper at the 2016 Buffalo Poetics conference and have been following his work ever since.

Closer to home, I’d recommend encountering the work of Dana Claxton, an accomplished visual artist whose decolonial poetics challenge settler poetics. There are also several emerging voices to attend to, particularly Dominica Martinello, Klara du Plessis, and Noor Naga. And we should all be watching and supporting poet activist Rita Wong who is dedicating her time and energy to protecting the Peace River Valley from the Site C dam, bringing attention to the destruction of sacred land and its longstanding Indigenous communities.